BradyMember
I'm 15 years old and have been playing baseball for a long time now. My teammates are getting more and more power every year but I can't quite get that power on my swing. One person in particular has hit a few home runs that were line drives that carried due to the top spin on the ball. I was wondering..

wayback100+ posts
You're confusing tennis and ping pong with baseball.

No top spin in baseball.

Back spin.
5/22/089:09 PM
❤️ 0
BradyMember
Oh. I always thought it was top spin that made the ball carry. Well anyway, how do you get back spin on the ball and make it carry?
5/22/089:11 PM
❤️ 0
AKFirstbaseman100+ posts
You have a slightly downward plane on your swing.
Also sometimes if you have the plane already, some guys drop the back elbow, you want it solid through the zone. Watch Vladimir Guerrero, he has a slightly downward plane, that he can do at any zone in or out of the strike zone.

FungoHighly Regarded and Beloved Old Timer
Read up on the Magnus force and it will help you understand why a baseball does what it does while in flight. 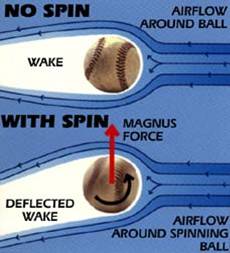 As far as "trying" to impart backspin on a baseball I would hesitate to have this as a goal. Backspin is a natural "by product" of good swing mechanics. --- BUT --- a picture of the Ken Griffey Jr. instructo swing might help show how this happens.

Now forget that I ever said this and just see the ball --- hit the ball.

I doubt there are very many left.

Trying to hit a ball that is traveling in a different direction than the swing would seem to be VERY difficult.
5/23/085:25 PM
❤️ 0

Place a tee on a bucket and work on same impact as you see in the pictorial message from Fungo.

Edgar Martinez and I discussed this practice and he also worked from both sides for muscle memory.

Where in New York do you live? On the 24 July, Robert and I will be at Yankee Stadium speaking to the NY Yankees Area Code team and on the 25 July, we will be at a clinic located at the King of Prussia, PA.

wayback100+ posts
Personally, I'd like to see the guy in that drawing get some shoulder tilt. That would drop that arc and give him a better swing plane to the ball.
5/23/086:49 PM
❤️ 0
BradyMember
Consultant:

How exactley would raising the tee affect the spin on the ball?

wayback100+ posts
COnsultant, with all due respect, please accept that I respect yor knowledge and experience. But, he'd be better served moving the barrel into the right position and tilting/turning the shoulders as the rear arm slots to get the barrel into into a slight upswing.

That swing in the drawing is one of those "looks nice" in the picture, but it ain't how they swing.

The point of impact is going to give it the back spin. That being said, I can give it back spin by swinging down...but it's not going to carry all that far.

Consultant10,000+ posts
Wayback;
Are you in California? Did Ted Williams have "back spin"?

Have you seen the old video of Ted Williams hitting off a high tee at Fenway Park?

Please if you desire contact Rare Sports Films in Naperville, Illinois for the CD. The best in hitting instruction. Ted is talking to Ranger and Red Sox players on the "Science of Hitting".

Do you know Mike Diaz from Pacifica, California and the Pittsburgh Pirates. He learned the "high tee" from Mike Schmidt and Bill Virdon.

Most athletes learn from "hands on" procedures
rather than visual or audio.

wayback100+ posts
Are you saying Ted Williams swung like the kid in the drawing? Ted would not agree with that swing. He was an advocate of upward path, as fastball had slight decline from higher mound/release point.

Did you tell the kid to swing the kid in the drawing? Keeping the shoulders level to the ground is creating a downward path to the ball.

What's California got to do with anything? Are you saying if you don't live in California, you don't know hitting?

BTW, did you meet Ted Williams? I did. I live 6 miles from Route 24 which leads to Lakeville, MA. That's far from California. But, it's where Ted ran his camps. In fact, there is still a camp run by a former student who was also the 5th pick in the first round. He also was a hitting instructor for four years with a MLB team (oddly enough in California). They've since moved the location, but it was a continuation of Ted's camp. http://playballcamp.com/staff.php

But none of that has anything to do with swing plane, and that the swing plane in the picture is wrong.

PS. you mention the TW video is a must see, then follow that with most athletes learn from "hands on" rather than video. Just throwing that out there. lol Some people are better administrators than instructors.
5/23/089:07 PM
❤️ 0
PGStaff10,000+ posts
The best Major League hitters make contact on the plane of the pitch. There is too much consistent proof to think anything else. The pitch plane and swing plane meet pretty much head on when a fastball is thrown. Hitting the ball while the bat is moving downward would be a mistake. To hit a ball well on a downward path, would mean a hitters timing and accuracy would both have to be absolutely perfect.

Anyone with any doubts should order Rightview Pro and see the major league hitters for themselves.
5/23/089:21 PM
❤️ 0

quote:
To hit a ball well on a downward path, would mean a hitters timing and accuracy would both have to be absolutely perfect

Agreed. You would essentially be slicing the ball. It would have back spin...but still no carry.

I can put back spin on a cue ball. It's not carrying.
5/23/089:30 PM
❤️ 0
Brilliant Mind10+ posts
Determining that spin over the top (rotation away from impact) vs spin top of ball rearwards to the impact is fret with problems. There are too many related issues of ball aerodynamics, physics and conditions of weather (barometric for one; time of day another). I am speaking of maximum distance, of course.

The hooking HR from a RHB down the LF line is topspun. Or at least topspun at some time in its travel. The CF HR on a high 100 mph fastball, underspun to the slightest. It would not reach 450' if driving itself downward with reduced lift.

What were the forces actng on the drag-lift of that particular ball (damaged by the impact) and its seams? Was the night air typically moistured, the day air humidless? Was the ball up or downwind and with what spin?
5/24/083:33 AM
❤️ 0

wayback100+ posts
Weather issues and time of day are irrelevent to the question as they are not within control of the hitter.

The largest force acting on the batter's attempt to create backspin is the pitcher. After all, he's trying to throw the pitch (velocity, location and movement) that the hitter is not expecting, or will be overmatched by.

BTW, I'm not so sure of the hooking (or slicing) foul being "top spun" as much as "side spun". lol
5/24/086:55 AM
❤️ 0
tarbaby2Member
PGStaff said: "The best Major League hitters make contact on the plane of the pitch." I would have to agree 100%, as would Ted Williams. Read the "Science of Hitting" to get more about it. The best contact resulting in the best carry is to hit a ball with a 5-10 degree downward flight with a 5-10 degree upward movement with the bat. This will result in the optimum contact point of the round ball meeting the round bat. Other factors come from the velocity of the pitch and the strength/power of the swing.
5/24/089:17 PM
❤️ 0
Brilliant Mind10+ posts

quote:
BTW, I'm not so sure of the hooking (or slicing) foul being "top spun" as much as "side spun".

Nitric_Acid100+ posts
This is an interesting article on how backspin affects the distance traveled by a batted ball.

That said, if you are having trouble driving the ball, I would look at your swing mechanics and not worry about backspin.
5/24/0811:21 PM
❤️ 0
Back To Top

Receiving Inside Pitches
1 hour ago

Tread Athletics?
14 hours ago
Who to track on MiLB.com
20 hours ago

2021 mlb regular season
2 days ago
TPM back surgery
2 days ago
Where do you have to go?
2 days ago