Far be it from me, but I don't think we are getting the updates we should on James Woods .

We just got back from this which was fun (and it worked out so both girls could come):

So far the adjustment is going well. He's very mature about the baseball part and still an 18 year old with everything else. Examples: 1. He asked us to buy him a pan for their residential hotel room (dude, you have your own money...go to Home Goods and drop $19 on a pan); 2. he met Blake Snell this weekend and talked to him for 20 minutes...75% of which was about whatever video game they both play; and 3. He "forgot" to tell us his hand x-rays came back clean for almost a day...but he did tell his sister who also didn't think it was worth mentioning.

He's missed 5 games after taking two 95 mph fastballs (the one to the hand is the one that had him out). He came back for one game on Monday and aggravated it throwing someone out trying to leg a single into a double so he didn't play on Tuesday. So far, after 21 games, his BA is .318 with an OBPS of .825. He's playing all his innings at center which he loves. He wants to cut down on strike outs and increase multi-base hits but otherwise he's doing well. They have two more weeks and then they have a week off before fall instructs start.

Sweet! Holy God Paula, He is bigger than ken now.

And I do understand the 18 deal. Oblivious doesn't begin to describe it.

He should be buying u pans.

@Good Knight also made no attempt to grab the bill at dinner. LOL

Kenny, at 6'5", is definitely the little Dad now. James's base seems to be getting stronger too (I posted a link with pix below). I'm really interested to see what/how they work on him in instructs. He's also stolen 8 bases so it is going to be interesting to see if they work on strength to increase power or balance it with speed.

The rookie league is over and James is headed home for a few days before fall instructs. His final weekend: Turned 19. Hit another HR, grabbed a few more RBIs and got his OPS to 1.000. Not bad!

The rookie league is over and James is headed home for a few days before fall instructs. His final weekend is summarized . Turned 19. Hit another HR, grabbed a few more RBIs and got his OPS to 1.000. Not bad!

This is a fantastic thread!  It is so nice to see good things happening to good people!

My guy is also 1 day older and a soph in college...... small world.  Sept 16th is the most common birthday in the US.

* oh and James numbers are sick

My guy is also 1 day older and a soph in college...... small world.  Sept 16th is the most common birthday in the US.

* oh and James numbers are sick

Is it? I know this changes, but for a while me and my ex-wife had the most and least common bdays.

Makes sense. He shares a birthday with my Mom. 😂

More conceiving holidays in the near future are certainly conceivable.

More conceiving holidays in the near future are certainly conceivable.

For some reason I am re-living this great movie in my head. If he is home for a week, I hope you stocked the fridge. He is getting huge and still fast. Nice combo!

This just happened. Nice finish to the season. He got home yesterday. Went hitting with Dad today. Already destroyed his room. Also, love you guys but I have no desire to discuss conception in any way shape or form with you.

Here's the final Prospect Team of the Week 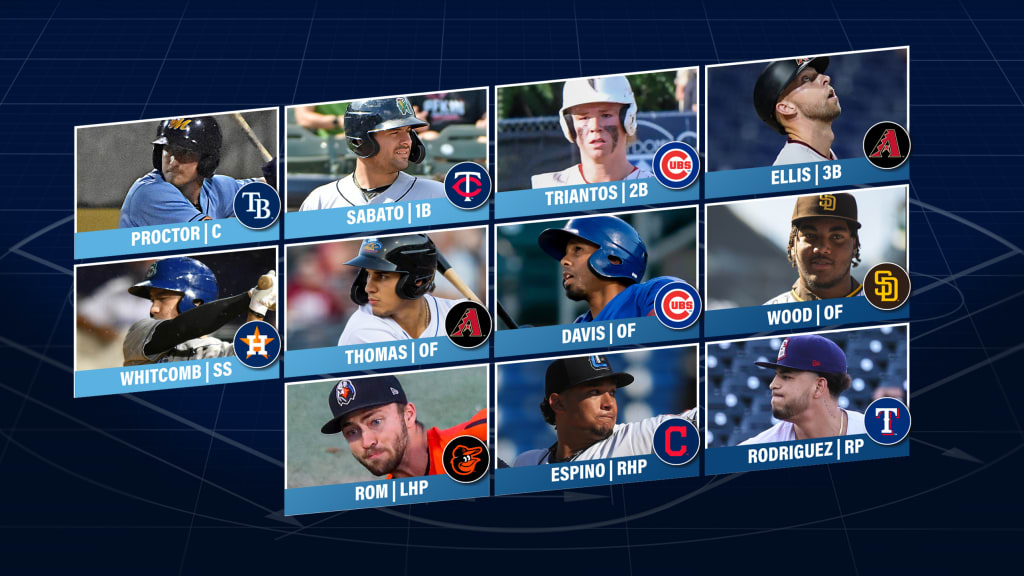 Wood started the week by going 5-for-8 with a homer on Monday and two doubles and five RBIs on Tuesday and ended the week with a 3-for-3 day and another home run. While his pro debut has been brief, the Padres’ second-rounder from the 2021 Draft has handled it very well, with a .372/.465/.535 line across 86 at-bats to go along with 22 RBIs and going a perfect 10-for-10 in stolen base attempts in 26 games.