Looking for swing advice for 2021-

Great coil inward as he goes forward.  Very nice.  Most people don't do this right.

Then you ruin it with hands behind the back elbow at toe touch.  This is causing bat drag, and losing the power from the coil.  Also, notice the back forearm is vertical.  Should be horizontal (when you bring the elbow down the bat head should have turned around).

So, so close.  This fix will make a big difference. MidAtlanticDad10,000+ posts
I agree with Sultan about the bat drag. The problem with drag is that you lose some of the explosive power that your lower half and torso are bringing to the party. The arms out away from the shoulders are allowing a disconnect from the powerful rotation of the shoulders, hence the drag. Not a perfect analogy, but since you're in Alaska it makes me think about chopping wood. You don't extend your hands out away from your body when chopping wood. For maximum ax head speed you keep your hands in and keep your grip tightly connected to the power of your core.
To correct this you might try a combination of internal and external cues. I'm a big proponent of external cues, but I don't completely dismiss internal cues either. Internal would simply be showing him some slow motion video (e.g. Cabrera, Trout) and note how pro hitters have their right upper arm parallel to the ground when they start to load (elbow pointing at backstop). And their hands are closer to the pitcher than their right elbow (your son's are not). He could try some cues like keeping his bat on his shoulder until loading, but again, internal cues are hard to adopt.
To me, effective external cues are harder to figure out, and vary more from player to player, but in the end they are better at effecting change. The idea is to focus on results, not on technique (let your body figure out the technique). The main issue with drag is bat speed, so measuring his bat speed or exit velocity while training would help. Immediate feedback while he's trying new things will help his body figure out what's working. Another thought is BP with inside pitching faster than he can get around on (just move closer if you can't throw hard/accurate enough). The idea being that it will force his body to figure out how to get the bat head around quicker (by eliminating the drag). I would set the goal as pulling an inside pitch that he can't get to with his current swing.
Just my 2 cents. Good luck.
1/7/195:20 PM
❤️ 1
SomeBaseballDad5,000+ posts

The next vid is his jr year. Notice how similar the bat path is to your sons? Also, the elbow leading the hands. I begged him to consider going back to the old swing but try convincing a teenager who's hitting over .400 of the need to change. Well his senior season he struggled, that combined with showing his vid either here or over at baseball 101 and receiving the same advice you have he agreed to make a change.

Here's his swing last fall at college. The results have been pretty significant, at least to this point. Hit .429 in a couple of exhibition games and live pitching scrimmage. I can dig up a vid of him taking a 94 mph inside fastball down the third base line.

He went back to loading the scap into the back instead of walking away from the hands. He also got a small bat and started doing one-handed drills. What he found right away was, although he is a big strong kid in the macro sense, the muscles that control the swing not so much. Mostly the back arm. Balls off the tee from there were into the dirt 10-15 ft in front of the tee instead of into the back of the net.  IMO these guys are giving you some good advice.

thank you so much  for the feedback.

I will post changes as he is one committed to the change.

I'm just doing my part with helping him work on the dream.

First two links are the same.

First two links are the same.

Here is a update:

2021 is Learning to sync lower half and become more explosive. Trying for the 90+ EV this year. 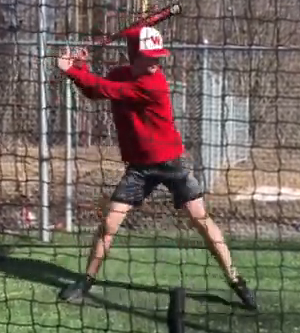 Looks the same.  Vertical forearm, hands behind the elbow

Tread Athletics?
19 hours ago
Who to track on MiLB.com
22 hours ago

Receiving Inside Pitches
22 hours ago

New to site
2 days ago
Just ridiculous
2 days ago